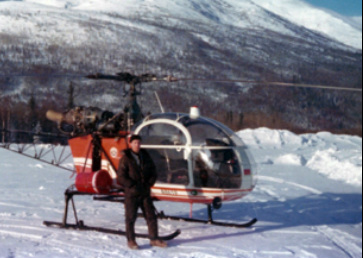 One of my 318's in Alaska
Introduction
As a teen and stepson of a biologist in Alaska, I found myself immersed in the world of evolutionary thinking of the day.  Magazines like Nature, Scientific American and National Geographic sat around our living room table.  Geo's new television series had just come out, touting evolution with every episode.  Dean Kenyon's latest work; "Biochemical Predestination", was the rage of the day, proving the self-assembly of chemicals into amino acids. (Well, almost proving it; Kenyon seems to be venturing more into our camp).  Nuclear physicists had unlocked isotope clocks within the rocks, proving with atomic accuracy the Bible's inaccuracies. Usher being replaced with terms like "potassium/argon,"  "lead/lead" and such, all very scholarly, so who could argue with nuclear science? We had won a war with that stuff.  Even a watchmaker introduced the "Accutron", an electric watch as accurate as nuclear dating, or so claimed the TV adds.  Men were walking on the moon with this new science for heaven's sake, and with such an onslaught of "evidence", who could prove them wrong?   The "Jesus freaks" were just that, marked as fools while the "scientific" marched onward, holding Darwin out as their new God. The Bible is a myth they assured us, fitting for grey-haired grandmothers, used as quaint musty bookends.

As all this was going on, paleontologists in Africa were unearthing parts of ape-men monthly it seemed. It was obvious that any day they would find "the missing link," and the anticipation of this certain event eventually substituted for facts.  Simply repeat the story enough and it becomes truth, and according to Miller with enough time even dead chemicals will spring to life. The textbooks were full of his laboratory tests and models, no other explanation offered or needed.

As the entire weight of media, magazine and textbooks came to bear on the subject, how could a thinking person not get this picture?  It was obvious to our youthful minds that the churches had perpetrated a fraud, the "Opiate of the Masses" we were told, so how could one realistically consider such fairy tales of a God?  It seemed amazing to us, the Enlightened, that humanity had been baffooned so long. Television and movies chimed in with a flood of humanistic leading performances, mocking those of faith as backward know-nothings and making heroes of the godless, who always seemed to save the day, flaunting success and free sex, having a solution for everything.  As holders of these wise new truths we could create a great society, they told us, no longer constrained by the moral boundaries based on the existence of some imaginary God, this all to the horror of grandma who knew better all along.

Opposition from credible sources were quickly silenced; simply replay the same lies over and over, do not bother with retractions, missing evidence was easily created with the brush of an illustrator and a few words. If an ape-man was needed, a few strokes of a creative artist with some scientific input and there he was.

As these concepts matured into our worldview, we swallowed the pill of evolutionary thought and were poisoned.  Many made serious life decisions based upon this ideology, any interest in the things of God evaporating.  I saw those of faith ridiculed and mocked in my circle, having little in hand to stop the onslaught among my peers.  The effects of all this influence goes on today, that generation now the educators, writers, media executives, judges, lawmakers and even Presidents of our time, the end result an utter dismantling of our society and the family unit, evolutionary thought now infiltrating into every level of science, education, law and philosophy.  We need to understand this nation is literally going to hell while on earth today.  Our jails are over full, divorce is rampant, drug use uncontrollable and as of this writing, 40% of new births in the US are from unwed mothers.  Ask any prison warden, 80% of the male inmates come from single parent homes, when you run those numbers we may as well build prison states, as 1000 acre compounds won't hold them all.  Clearly, the effects of our free lifestyle are now irreversible, the only answer left a wholesale return to God.

Back then I took the view we only live once and are nothing but "star stuff" Sagan told us, the life span of a solar system nothing more than a tick of the universal clock he says.  Our values were relative, and everyone knew overpopulation our biggest threat next to war, spare infants, spare cats; what was the difference, make space!  (I square off with this myth in the Human Origins post).  I faced life then with simple absolutes; It was me against the elements of Alaska, human effort vs the laws of physics and nature, all else is left to chance and fate, there is no God, time is endless and people insignificant.  We are left to this life and that’s it, survive with your brains and brawn then act a wise intellect in public.  What a hopeless delusion.  I became an egotistical, cold, self-centered person, thinking I was wise but terribly unfulfilled in many ways.  I knew secretly there was a big hole in my life, but what was wrong?  I couldn't find the answer.

All that changed one night on a flight gone wrong; at the crucial point I received help from neither chance nor my  every effort, but from an unknown element; speaking to me and adding an hour of fuel to my tanks my last leg over water.  Safe on the ground I thought, "so gramma was right all along, there is something out there!"  After other near misses, (like a heli crash where my seat was crushed flat), I made the decision and turned my life over to God, a decision I've never regretted since.  After this incident my emptiness began to be filled and other conflicts in life began to make sense. There is something bigger out there I now understood, despite losing so many friends in this country along the way, that chilled me to the idea of a loving God beforehand.  Angry about how I had been brainwashed by the system, I joined the effort to expose the lies and tell the other side of the story, so here you have this work.

The topics addressed here summarize the major issues concerning the Bible, faith and evolution of our day.  It comes to you doing my humanly best to share these pertinent truth's with you and I will tell you Iv'e faced many skeptics on this journey and have never been disappointed.  The Bible is true, and you can depend upon it fully, no exceptions.

Some of the information is breaking news, like the MO-1 bacteria, recently discovered by a team at Osaka University to have a micro 24 gear planetary gearbox, synchronously driven by seven proton-powered motors complete with clutches, modulators and anti-skid sensors all in a single cell.  (As a professional helicopter pilot/technician who worked with planetary gear systems, the evolution of such technology is laughable).  Second, the recent un-finding of Dark Matter, touted for over 20 years as the undetected and unseen glue holding the Galaxies together, is now debunked.  You will find these and many other exciting revelations supporting a Biblical Worldview and Intelligent Design in these posts, including worldwide flood evidence from the Grand Canyon and more, completely refuting evolutionary theory at every point.  As appropriate, I included many references and links to help in your self-study this vital subject, so you can share with others.  If there is no reference too bad, it comes from one who's word is good and has seen what the other side has and found they have nothing.

Much of this knowledge is little of my own.  I owe acknowledgements found in the footnotes, video links, lectures and those I worked with in the field over many years.  My personal observations, education in geology, (telling enough, two of my PhD professors converted to a catastrophic view of earth history while in school), and 30+ years experience working in mining around the globe.  Don't forget to enter your contact information, I will be giving away two new books about these topics, Genesis Alive the book, and Last of the Long Hunters, this volume including true stories about my life and flying in the Arctic.

May God bless you in your quest for truth, may you have a renewed faith in the Creator and His written Word through these pages,