Grand Canyon, a remnant of the Flood

In its depths, a clear "Event Horizon" is indicated. Read on.. 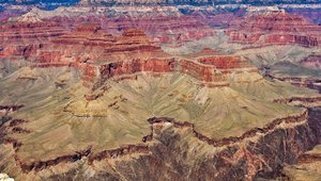 The Grand Canyon Event Horizon
What an amazing place! The formation of this beautiful Canyon poses a question: was it formed with a lot of water over a short period of time or, a little water over a long period of time?  Looking north-west across the Canyon, can you imagine an ocean of water spilling across the continent, heading downhill, taking everything in its path?  More importantly, an Event Horizon that boggles the mind exits in the depths of the Canyon, so travel down with us!  Can a river eroding one grain of sand at a time leave the jagged edges in solid granite and lava?  No, river and creek erosion form smooth walls.

It has been proven that a catastrophic gush of flood water can rip apart basaltic or metamorphic formations. Evidence from the Missoula Flood and Mt. St. Helens events supports this.  The Missoula Flood theory was mocked for 50 years before geologists determined that water can cut through solid volcanic rock like butter, even opening broad gaps in mountain ranges.  These events required a rewrite of history and geology textbooks relating to geologic feature formation.  We now know that often creeks and rivers exist due to catastrophic events that created the valley features first! 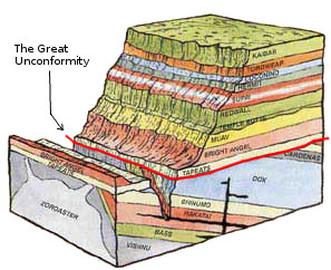 Grand Canyon Lesson  #1 - The Great Unconformity
This is a cross-sectional view of the Canyon noting the various layers.  The red line denotes the Great Unconformity erosion line. The Great Unconformity is an event horizon where high-speed water flows eroded the surface of huge granite blocks across much of the earth's surface, as well as the broad area called the Grand Canyon Supergroup (below the Red Line). Observe the tilt and fault lines of the Supergroup sediments, stacked below the red line. These were the original earth's surface before this event.  Now they are eroded, broken, buried, and tilted.  What happened?
It's obvious a huge fault occurred where the Supergroup rocks (igneous) were catastrophically thrust up and to the right-hand side of this view.  Interestingly, the Unkar/Chuar zone was in place before the Canyon-forming event and contains no fossils. We see that only a portion of this "original Earth" remains.

Without a doubt, this cataclysmic feature in the earth's surface is an Event Horizon of Earth History.  The Earth was a completely different place before and was utterly transformed by this event.  The entire face was scraped flat and subsequently water-carried sediments were re-deposited to leave behind what we see today in the Canyon and the entire World.  Sometime in history we know the super-group layers were horizontal. Could these have been part of the earths surface that Adam walked on?  They are sedimentary and cultivatable. The Bible records that the earth was made "out of water and with water".  One cannot imagine nor conceive the colossal scale of these events and the environment on earth while this was happening. (see Dr. Walt Brown's Video below).

All the layers are water-deposited with turbid current evidence. If there was a World-Wide Flood, what should a cross-section of the crust look like?  Exactly like this!  The tilted Unkar group may have been the ground that Adam walked on.  The Bible teaches the earth was made "out of water and with water" so this would explain these mysterious lower layers which show no sign of any fossils, a portion which is open to view in the Canyon! (small section where red line runs off the RH edge in the diagram).  Does this make sense according to the Biblical account? The answer is a resounding Yes! ﻿We see the Origins story of Earth and subsequent Destruction stamped here in the Rocks!  So let's hike further down and take a look!﻿ 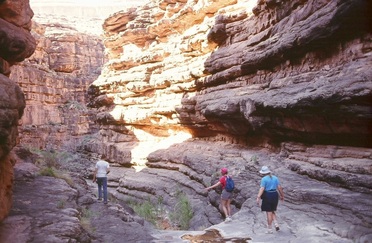 The Tapeats overburden over 1,000 ft thick
Here an interesting picture begins to unfold.  The first mineral formation above the Unconformity (Red Line) is called the Tapeats Sandstone, a fully water-transported deposit over 1000 feet high with fossils.  This layer is very uniform.  Below this layer no fossils exist.  There is little sign of erosion by time here.

In short summary, first, the original creation started with the basalt crust rocks, then sediments carried by water made the outer layers.  Later something happened: the early earth's surface was destroyed catastrophically, shook by earthquakes, volcanic action, fast moving water and sediments!  This is the exact sequence we see in the Canyon and other places on Earth. The Tapeats extends over 1,000,000 square miles into Canada.

What other story makes more sense?  Evolutionists teach these layers were made Millions of years ago by multiple "placid seas" that formed layers of rock. This story is not supported in the rocks nor the fossils. 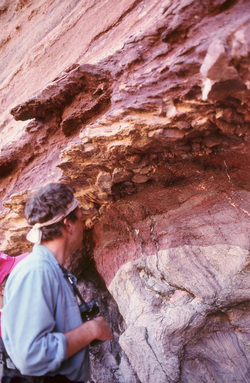 reat Unconformity contact close up
"Placid seas" melting granite?
In this picture, you can see the heat-tempering caused by friction, weight, and sawing action cutting off the tops of these granite blocks (actually mountain ranges) by the Tapeats.  This is a highly mineralized zone where mining occurred in the Canyon. The Park Service signs tell us the Canyon was formed by 12 or more calm and "placid seas" over many Millions of years.  This concept is not supported by the rocks however.  The Great Unconformity contact zone exhibits heat, severe compression and a perfectly defined event line only 1/2" thick in places.  The Unconformity and these water-deposited layers pushed by currents tell a story in the rocks, a serious story.

Fossils in the Canyon (1)
Remember the Nautiloids?  In the Grand Canyon there is a limestone layer that runs over 250 miles around the canyon from Arizona to Las Vegas that contains tens of millions of fossils with an average of one nautiloid fossil per four square meters, and nearly one in seven fossilized standing upright!  Famed geologist Dr. Steve Austin points out that this enormous nautiloid deposition covers more than 5,000 square miles, providing indisputable proof of the rapid formation of this limestone layer.(1)  Contrast this with the textbook explanations which claim that such layers form extremely slowly as grain after grain settles to the bottom of a shallow and placid sea. (2)  It should be noted that most of these creatures are of uniform age all across these rocks.
http://www.icr.org/article/hands-lesson-rapid-fossil-formation  (1)
http://youngearth.com/grand-canyon-nautiloids (2)

An Evolutionary Eye Problem
The horizontal layers above the Unconformity have fossils of all types in abundance, hence their name - Cambrian.  But why are there no fossils found in the "Pre-Cambrian" (pre-life) subset below the Unconformity?  It's because God did not put life on the earth until He was done forming it.  Fossils are made by quick sediment covering, otherwise they deteriorate and skeletal structures dismember.  It should be noted that fauna from the Ordovician and Silurian are missing in the Canyon, fouling the Geologic chart of evolutionary Common Descent, (i.e. worms to man).  Actually, creatures like Trilobites existed on the pre-flood sea floor here in great numbers.  These animals have been found in soft body where their amazingly complex eye anatomy was studied. It turns out that they have a very complex lens, capable of adjusting for underwater aberration.  Below the trilobites in the sea floor sediments we find worm fossils, so evolutionists claim trilobites came from worms! They don’t offer an explanation for the complex transition required or the eye problem, other than one day a worm had a light sensitive spot that evolved into an eye, then two of them!  To postulate such fairy tales is telling of the evolutionist's rendering of earth history - a history they write to support their views, despite solid contrary evidence.

The rocks below the Unconformity are melted granites and schists. It takes immense heat to melt either.  At this contact evolutionists claim that life began in "calm and placid seas".  Somehow, 500 million years of their common descent time is missing here. 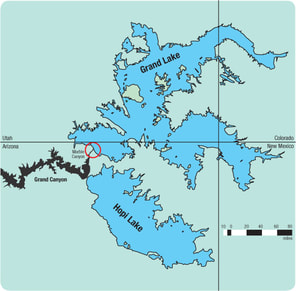 An ancient shoreline exists above the Canyon
Water trapped above the canyon zone has been identified
An ancient lake shore has been located north of the Canyon that most likely trapped water held by a natural dam after the flood waters receded.  Another event likely triggered the soft material dam failure and, like the Missoula flood breakouts, emptied a volume of water equal to Lake Huron across the still soft sediments of the Canyon area, cutting the gorges and side canyons we see today, possibly in only a few days.

One cannot help but be affected by venturing into the Canyon depths and reflecting about what the Rocks are really telling us.  Not a "calm and placid" origin at all. This feature of the Earth is perfect evidence of the World-Wide Flood.  God's Word tells us that the first judgment was by water, but another is coming by fire. We need to pay attention to these truths and warnings and search them out.  The immensity of the Flood event challenges the ability of the mind to comprehend it.  Reflecting upon it is both humbling and fearful at the same time.

Trapping marine animals over 50ft in length, leaving them thousands of feet high in the mountains and the thousands of fossil beds, some containing Billions of creatures is mind-boggling to conceive.  They and the people that perished are all calling to us, "See! Act!"  Look at all this evidence!

Many people say God is non-existent or unjust, the author of death and pain.  But this is not true.  Few people know that the Bible teaches that after Christ was crucified he traveled to a holding place in the earth.  Here were held the spirits of those lost in the flood! He spoke to them - He gave them another chance!  He is the judge of people's actions and motives, He sees all and knows all.  He is good, we can trust Him!  The other side is this: the next judgment will have no escape path.  We are responsible, and God gave His Son to guide us. All will hear, and all will be judged.  To connect with the God who did this becomes important.  Through Jesus Christ we have the avenue to embrace the Creator and His Son, and receive the same pass Noah and his family received, by faith!

Christ mentions this event, He says:  "Just as in the days of Noah, so shall the coming of the Son of Man be" -  in a day!  Please search the truths out and God will meet you.  Now is the time - do not wait!  Events in the world now tell us that the Second Judgment the Bible teaches is coming!

For additional information, see Grand Canyon - Evidence of the Flood - Genesis Alive! and Last Mountain Standing - Genesis Alive! in this series.
Dr. Brown's Video below will challenge your understanding of earth's first hydrological systems, which were spring head rivers and evening and morning dew based watering without rainfall. This is completely unlike today's evaporation, condensation and rainfall systems that includes snow.  Open to Genesis Chapters 1-10 and compare!
God Bless you!