By Accident or Design?

At one time or another in our lives, people wish to know the why and how our planet and universe came to be. Modern science seems to have gone far out side the limits of reason to embrace a wholly naturalistic view of origins. Are they correct or mistaken? 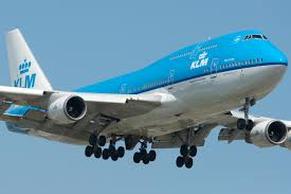 The Question of Origins
When you see a modern aircraft fly over, you would never question that this technological wonder, a result of wise and thorough planning required Intelligence acting upon matter to fly. But when you see a bird fly by and think to yourself, ‘what a beautiful creature!', what about its origin?  Some say birds were self-made by time and accidents, pretty amazing, but is that really true? Like this aircraft, can there really be a 'watch without a watchmaker' in the world of biological life? That’s the topic of this website, so please read on. 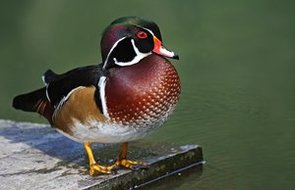 Beautiful coloring, hardly a result accidents!
Accident or Design?
Looking closely at the coloring of this wood duck, its deep hues and perfect lines, ability to fly, navigate and fuel itself, how could accidents and time paint such a beautiful animal without a guiding hand? All man's best efforts to canvas such an image fall short, so if the concept of evolution is so scientifically sound as many claim it is, shouldn't we be able to understand how evolution works, scientifically? And don't forget, Mr. Wood duck here also has the ability to replicate and repair itself, two things no aircraft can do! 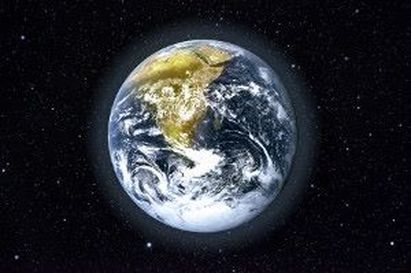 The Nature of Origins - The Earth
According to many science texts, the earth was formed billions of years ago after gasses and matter collected in space and self-assembled into our living planet.  Subsequently all the substance forming our rivers, oceans, land mass, atmosphere and minerals all self-sorted into Earth - they say. Can the order, cycles and beauty of this planet truly be explained this way? Or, was there an outside guiding force involved?  Think of all the mineral resources available for people to use to make life simpler, safer and more enjoyable here. Isn't it amazing each of these vital resources are distributed quite evenly on each continent? And what about the lack of excess harmful elements (like uranium or arsenic) that would prevent life on earth to thrive? Is earth a combined accident due to the probabilities of time and the vastness of space, or is there more to the story? Now think about it, our Earth suspended and floating in space with a moon at just the right orbit to create tides, without which the oceans would be one big stagnant pond! Space is where the Creator may safely show His creativity and Power without harming people, as below. 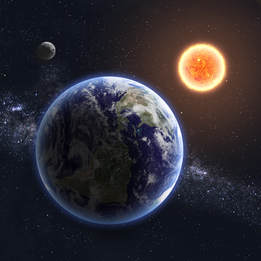 Our Perfectly Synchronized Solar System
of Sun, Earth and Moon. Earth enjoys a livable range of temperatures and wind velocities on the surface because of this balance, and, like liquid water, found nowhere else because we have an atmosphere!  The Sun and Earth relationship alone is astounding, but adding the Moon to the equation  demands that intelligence was involved, there is no other explanation, the mathematical probabilities for all this happening accidentally are just too high.

The Moon takes exactly 27.3 days to rotate once and this is exactly how long it take's the moon to orbit earth!  This type of motion acts is a built-in gyro that keeps the Moon very stable. The Moon also orbits us in the elliptic..  It also appears nearly the same size of the Sun from our perspective place on earth and provides a great nightlight for Earth. The Moon is 400 times smaller and also 400 times closer to Earth than the Sun is, providing for a perfect eclipse.

Old Solar System?  Not according to the Moon - we now know it moves away from us about 1.5"/year.  If you extrapolate that  mathematically, the Moon would have been in close orbit 1 billion years ago!  We should be thankful that an Intelligence designed such a perfectly working system for our well being on Earth. (1)   See this section for much more information concerning the "Time" issue The Question of Time - Genesis Alive!

Our Atmosphere protects us from the Suns harmful rays, and wonderfully provides a reflector for light, otherwise we would standing in darkness like on the moons surface!  Watch a meteorite shower some night and consider these deadly projectiles are being evaporated right before your eyes, like a shield from a sci-fi film!
1. Acts & Facts October 2013 Lisle, Jason L. "Earth And Moon" p. 10-12 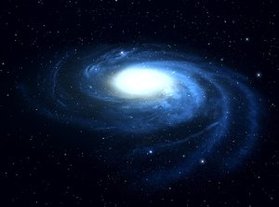 Galactic arms should have flown apart thousands of years past. We observe their rate of expansion today, how have they held together over "millions" of years?
We are safely away from the active center of our Milky Way Galaxy.
What an amazing wonder of order! For years Dark Matter has been the cornerstone of old Universe theories, approximated at over 14 Billion years old. DM was proposed by astrophysicists as holding galaxies together for this great amount of time - an unseen and detected substance who's supposed gravitational field is attributed for keeping the universe from flying apart, but news flash;
"Of late Astronomers mapped the motions of hundreds of stars in the Milky Way in order to deduce the amount of dark matter that must be tugging on them from the vicinity of our sun. Their surprising conclusion; There's no dark matter around here". Perhaps the current understanding of the laws of physics is slightly off". (1)  See Video by Astronomer Dr. Jason Lisle The Ultimate Proof of Creation - Dr. Jason Lisle, Part 1 of 2

Slightly off! This long established dogma, all wrong?  Doesn’t this illustrate that secularists are willing to 'believe' whats required to explain their concept of the Universe? Such a faith in the unobservable tells of their true bias and absolute, that is: To understand all nature without need of God.  And yet many of those same secularists would reject a belief in God on the basis that He cannot be observed!  Even the world's largest particle separator CERN searched for Dark Matter and failed. (2)   Interesting enough, at the same time the group announced the isolation of the final particle in the Standard Chart - the Higgins Bosin God Particle.  We should be very discerning of these claims and theories we see in the media as they waver back and forth Vs the facts.  It should be noted a Peruvian Observatory dared to challenge the prevailing Dogma on Dark Matter, as no American Institution would dare touch the subject.  Why is this important?  Because in truth, you are living in a Vital and Personal Universe created for you to observe, enjoy and live in.
http://www.space.com/15345-dark-matter-alternatives.html   (1)
http://www.dailygalaxy.com/my_weblog/2012/07/new-cern-tests-attack-the-existence-of-dark-matter-.html (2)

First life, a question that must be answered
Back to the earth origin story, evolutionists teach ponds formed where various chemicals collected. From these chemicals, parts of biochemical forms spontaneously occurred that led to self-assembly of amino acids (the building block of some proteins, cell material).  After more time these amino acids self-assembled into proteins, then cells, the building blocks of life.  But wait, the leap from a protein to a cell is like saying we have aluminum and then sprang forth a 747!  That’s a small statement about a big thing when we are speaking of life and origins.  For more on this topic see - The Question of Complexity - Genesis Alive!

From Poisons to complex functioning life?
When scientists like Miller attempted to duplicate this process in 1952, they did get acids, more accurately lethal poisons!  One observer related: “It has become apparent that organizing simple molecules into assemblies capable of reproducing and evolving is a far greater task than was generally realized during the excitement that followed the experiment”. (1)  Note that they added just the right chemicals known in an amino acid to get this compound, but were stopped cold as far as any life-making goes. Now as these stories are told and retold with artist conceptions of self-making life, cell's start springing from the textbook pages and into our minds as a “probable” explanation's that eventually become beliefs.  Such experiments have long been suspended as failures.  The "unlocking" videos below offer an excellent overview and conclusion of the origin of life question.
See The Question of Complexity - Genesis Alive!  for more on this topic.
www.simsoup.info/Origin_Landmarks_Miller_Urey.html (1)

We invite you to continue in our study in Origins through this site. Thank you and may you find satisfaction in your quest for truth!